I’m Judge Mike Carter, Republican candidate for the newly created 10th District State Senate seat. I believe strongly in safeguarding our personal freedoms and securing our rights as guaranteed under the Constitution. I would greatly appreciate your support in the Republican Primary on Tuesday August 2nd. Thank you!

Mike Carter is host on the Cowboy Judge Show and administers several Facebook pages with hundreds of thousands of followers.


Mike Carter has served as a municipal judge in Missouri for 10 years. Judge Carter holds a Master’s of Journalism from Mizzou along with his Juris Doctorate.

Carter worked for the Missouri Attorney General's Office in Consumer Protection and clerked for Missouri's Western District Court of Appeals.

Carter is President of Carter Law Offices, broker of Homes USA, past director of the St Louis REALTORS Association, served as Senior Lecturer of Business at the University of Missouri for 14 years, and is currently general counsel for one of the largest employers in Missouri.

In his many years as a Municipal Judge, Carter was ahead of the curve in implementing sweeping changes to his court before the advent of statewide Senate Bills 5 & 572 which ultimately brought the state’s municipal courts in line with Carter’s municipal court efforts.

Carter knows first hand we need to FUND the POLICE, rather than some of the crazy notions that have circulated throughout the county.

Other circuit judges have commended Judge Carter for his forward-looking efforts and penned letters to that effect to other elected officials. 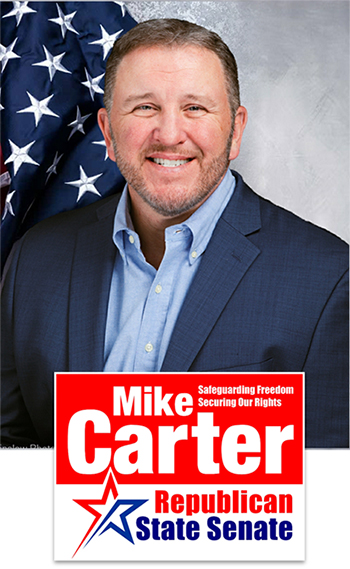